I got offered my first talking-head-expert-type television appearance the same month I was appointed to a lectureship. “Flipping heck,” I thought: “proper faculty members must get telly invitations all the time.”

Invitation Number Two duly turned up about six and a half years later. A splendid colleague at UCL STS put me in touch with some people making an edition of Horizon for the BBC, based on the question “What is one degree of temperature?” The theme – uncommonly open-ended for Horizon – obviously offered plenty of scope for the shoving-in of philosophical or historical oars. Rather unusually, the idea had come directly from the presenter, Ben Miller from off of TV and radio’s Armstrong and Miller, with whom I in due course ended up discussing thermodynamics in a copper-lined wort cooler in Wisbech. As you do.

At the time of writing, you can still see the end product here, if you can persuade the various computery bits and pieces that you’re in British TV licence-paying territory. The bit with me in it runs between 24:40 and 28:25. I notice that one of the other participants blogged his response to the end product, and I may, if I get around to it, do likewise. Here, though, I want to record my almost-novice experience of making a bit of telly. We elbow-patch-wearing academic types should probably be working to familiarise ourselves with the process, given the likely future rise of the REF impact statement as a substitute for information. 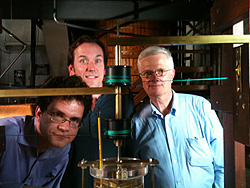 The people who produce TV documentaries do not simply phone you up and ask you to be on the telly. They phone you up and ask you for background details on, and contacts for, things they want to know more about. Provided they don’t find what you tell them soul-crushingly tedious, and can fit it into the narrative, they may use some of it. This, of course, does not necessarily translate into an offer for you to be on the telly. There are various ways of putting across information: interviewee talking head, interviewee chat with presenter, presenter talking to camera, voice-over narration, wordless montage with that blessed music behind it. A typical docu will use most or all of these, switching between them to hold viewers’ attention. The producers may decide that your story is best fed to the presenter or narrator, or that the stunning images you’ve provided speak for themselves. You should probably chase for an on-screen “Thanks” credit if this happens, otherwise you may cease to exist.

If you do end up on screen, you may be there for either or both of two reasons: to speak as an expert; or to supervise, explain, demonstrate, or make-look-the-part something which more immediately needs to be on screen. Watching the completed Horizon, I noticed that everybody at some point Does A Thing With A Thing, be it a building or a visual aid or a piece of ferociously expensive experimental physics kit. In my case, the Thing was a replica Joule paddle-wheel apparatus. The production crew was enthusiastic about the experiment, and about the idea of doing it, as Joule did, in a real live brewery. In the interests of further authenticity (and personal convenience) I lobbied for sites nearest to Salford, but they ended up going for Elgood’s of Cambridgeshire. Elgood’s is one of the few old regional breweries to have survived into the twenty-first century as a family-run concern, and the site, conveniently for television, Looks Like A Brewery (which many breweries don’t). Wisbech is a long way out of my way, but I reasoned that I could usefully combine the trip with polishing off a bit of archives work in Cambridge.

I’ll also have to admit that I was curious to encounter Ben Miller. I have fond memories of some of his earliest and most obscure work, with and without Mr Armstrong. There was, for instance, an extraordinary radio sitcom called The Young Postmen which was constructed almost entirely without laugh-lines, but which, as my fifteen-year-old brain tuned gradually into the concepts (John Thomson played a character whose comedy catchphrase was the word “Yes”, delivered normally), became wildly and inexplicably funny.

Ben Miller is also, famously, an ex-physicist and an enigma. There was a period of a few years around the year 2000 for which he was, simultaneously, the comedian most likely to insist on introducing genuinely transgressive levels of frontal nudity into a basically mainstream TV show, and also the comedian most likely to turn up narrating a polite audio documentary about CERN, such as could be played to an inquisitive child as a capsule explanation of what Radio 4 does. He is also, as it happens, the star of two comedy sketches that speak deeply to the academic condition: Clockwatching Teacher, a masterclass in how to inspire students whilst carefully ring-fencing precious research time, and Glengarry Glen Research, which seems more prescient with every passing minute.

I digress. In the event, Mr Miller was, I’m afraid, neither a prima donna nor one of those blandly pleasant and professional but vacuous types. Sorry about that. He was very charming, and gave off that slight sense of restless urgency I associate with the people I met as an undergrad who were inevitably going to end up in charge of more stuff than I was. When not filming, he spent much of the time on the phone, discussing what I assume were sketch ideas in progress, given the unusual number of references to Vikings.

Beyond the people who are actually going to be televised, it currently seems to take about four people to make usable television. The crew I met at Wisbech consisted of the director (who was also the producer), cameraperson, soundperson, and assistant producer: this last role, for any Press Gang fans reading this, is best summarised as Kenny to the director’s Lynda. These people are then in constant phone contact with another person who deals with booking and co-ordinating things from the production office in London, or possibly from Thunderbird 5.

If you watch a recording crew doing stuff for a while, you will conclude either that they have collectively and completely taken leave of their senses, or that they are working very hard to get things done in the only way logically and practically possible. Both interpretations are completely consistent with the evidence, and you can amuse yourself by flipping your brain from one to the other in Necker cube fashion. You will need to find something to amuse yourself with, because the process involves several hours of frantic waiting. UK citizens currently paying my wages will be delighted to learn that I occupied myself usefully, having taken a laptop and some research-related reading along. I did not take any marking. Of the many great unwritten rules of academia, perhaps the greatest is that exam scripts and brewhouses don’t mix.

What surprised me most – and this might merely indicate my nasty suspicious mind – is just how little artifice is involved in the process. Nobody asked me to record one of those ridiculous ‘greeting’ sequences (memorably nailed by Verity Stob: “Hello, would you like to come in and interview me for British Channel Four?”). There was a kind of proposed script – really a detailed inventory of points the production team wanted to see covered, some of it derived from info I’d given earlier – but they hadn’t shown it to Mr Miller, and I didn’t have sight of it during filming. Most of the dialogue recorded was the result of Mr Miller asking questions I wasn’t altogether expecting, which I answered as best I could. Yes, there was the odd “Could you give us that again…?” for technical reasons (and I had to nip off to my cunningly secreted copy of the Cardwell biog afterwards, to check I hadn’t put something in the wrong decade), but it was all about as real as it could have been. Not much of the question-and-answer stuff made it to broadcast, mind: the sequence as edited was always going to centre on the prop. 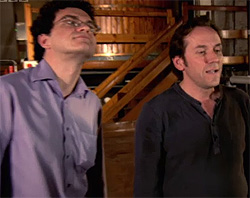 I think I'm staring up at the scaffold here.

The silver-haired gent who appears without explanation in the broadcast is Alan The Props Guy. Alan, I was impressed to learn, had constructed the paddle-wheel replica by hand, guided only by descriptions. Though the replica must have been by far the most laborious element to get right, it gave the least trouble on the day, since it was transported ready-assembled and was happy to sit quietly in its jar until needed. Most of the effort and much of the delay was occasioned by the sodding wooden scaffold you see being put together in the time-lapsed sequence, whose only function was to give sufficient drop on the weights. Everyone available was eventually pressed into service in setting up and working this contraption, although the editing massively overstates my involvement: if you look closely, you’ll see me gradually retreating to the fringes as my ineptitude with mechanical contrivances becomes quietly clear.

TV and Radio’s Ben Miller, on the other hand, is some kind of DIY demon. It so happens that the day in question was part of my TRAC audit week: I could really have done with a space on the form for “Standing in a disused wort cooler watching a high-profile comedian operate a powered screwdriver”. (I forget what I did put it down as. “Other general support”, perhaps.) They even went as far as filming some close shots of him polishing off the last few bits of screwing-in to make it look like he’d done all of it, which he had – although, being real, I suppose it would have looked fake.

Even so, it was rather late when we got as far as running the paddle-wheel (which worked perfectly), and there was a bit of a scramble to get done before the light – or possibly the patience of hot and thirsty individuals cooped up in a brewery without any beer – faded. An odd day, for me, but an interesting one; the oddness was not dimmed by reasons of economy and practicality dictating that I should go on to spend the night in the ancestral home of the brewing family I was due to research the following day. (They didn’t appear to mind, being dead.)

Does it pay? Not in my experience, although the Corporation was happy to cover travel and incidentals (sorted out upfront and with great efficiency via Thunderbird Five). Ultimately, though, these things are above such vulgar considerations as earthly riches or the state of your public engagement profile: you really have to want to stand in a wort cooler describing the history of thermodynamics to a popular comedy sketch performer. I did, and quite frankly, I’d do it again if the opportunity arose – although it does seem quite earth-shatteringly unlikely that it will.

This entry was posted in Uncategorized. Bookmark the permalink.